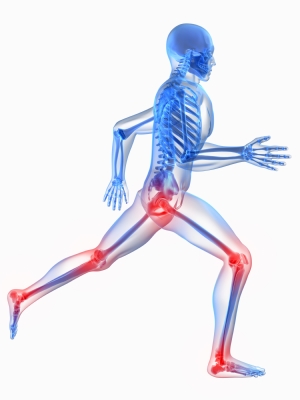 What is rheumatoid arthritis?

Rheumatoid arthritis (RA) is the second most common type of arthritis after osteoarthritis. It is an autoimmune condition where the body’s immune system attacks the lining of the joints. This causes inflammation that is seen and experienced as pain, swelling, redness of the skin and sometimes heat over the joint. In more severe and long term cases, rheumatoid arthritis may lead to complications such as joint nodules and deformities. RA is a chronic condition. There may be periods where the symptoms are very mild or totally disappear but it returns again in the future.

The exact cause of rheumatoid arthritis is unknown. Whereas osteoarthritis tends to occur in older people (both men and women over the age of 60 years), rheumatoid arthritis usually starts earlier in life and women are more frequently affected. Normally the immune system is able to identify the body’s own tissue and only attack foreign invaders.

However, in autoimmune conditions the self-regulatory mechanism becomes dysfunctional. The immune system targets specific tissue – in this case the lining of the joints. RA may also occur simultaneously with other autoimmune conditions like psoriasis (skin condition) and jointly the condition is known as psoriatic arthritis.

Sometimes an infection may precede rheumatoid arthritis. It does not cause RA but may disturb the immune system in some way that it starts to attack the joint lining. Rheumatoid arthritis is also not caused by depression although it has been observed that people suffering with depression who also have RA tend to have more severe symptoms.

The signs and symptoms of rheumatoid arthritis can vary in intensity. Some people may have very mild symptoms for years while others have intense symptoms in episodes or constantly for most of their life. Rheumatoid arthritis is an inflammatory joint disorder. Inflammation presents with the following symptoms:

These symptoms are not unique to RA. Most types of arthritis have similar symptoms. However, there are some features that are characteristic of RA. This includes:

There may also be other non-specific symptoms like fatigue, weight loss and fever in some cases of rheumatoid arthritis. It is important to verify that these symptoms are not caused by other diseases that may also be present.

A flare-up of symptoms does not necessarily mean that RA is getting more severe. These episodes are common and may occur for a number of known and unknown reasons. Flare-ups have to be managed appropriately to relieve symptoms until the condition eases to some degree.

There is no specific test that can diagnose rheumatoid arthritis. In the early stages RA is difficult to diagnose. Often a clinical diagnosis is made based on the physical findings and patient’s history. Blood tests like rheumatoid factor may not be positive in all RA patients and can sometimes be positive in people who do not have RA.

Other blood tests like ESR (erythrocyte sedimentation rate) may be useful for confirming inflammation in the body but does not indicate where or why the inflammation is occurring. X-rays may be used to observe changes in the joint that is seen with RA but in the early stages these changes may not be as evident.

Although rheumatoid arthritis is incurable, there are a number of different therapies that can help to manage the condition and provide symptomatic relief. Treatment options include medication, physiotherapy and sometimes surgery for severe cases.

There are other drugs that may be used to treat RA but these are not as often used as the medication mentioned above. It is important that medication is used as prescribed and physiotherapy is also commenced to improve joint flexibility and limit further joint damage.

Surgical procedures may only be necessary for severe cases of RA where there is significant permanent damage to the joint and surrounding structures. Surgery cannot cure rheumatoid arthritis. It may help to remove damage parts of the joint and replace it with prosthetics, repair damage to tendons lying around the affected joint and to stabilise or realign a joint. Long periods of physiotherapy is usually needed after surgery as part of rehabilitation to allow the patient to use the joint in the best possible way.