The year end is a time of fun and festivity often marked with overindulgence. For most of us, it starts at Christmas and rolls over till the New Year with little thought of the the calorie and fat content of foods. Even the most ardent dieter will put aside their weight loss plans to indulge in the Christmas lunch, often promising to return to a healthy eating plan in the new year. Being aware of the calories in the typical Christmas meal can be useful in making careful choices before eating – not only in the type of food but also the portion size.

The exact number of calories that one should be eating depends on whether a person is dieting or not. Although the kilojoule (kJ) is commonly used in many countries, most of us still talk about calories. The calorie itself is a very small unit of measure of energy and both food and activity is actually measure in kilocalories (kcal), similar to the kilojoule. However, it has become common place to refer to a kilocalores simple as a calorie. On average, an adult male should eat about 2,500 calories (10,460 kJ) per day whereas 2,000 calories (8,368 kJ) daily is sufficient for the average adult female to maintain a normal body mass index (BMI). 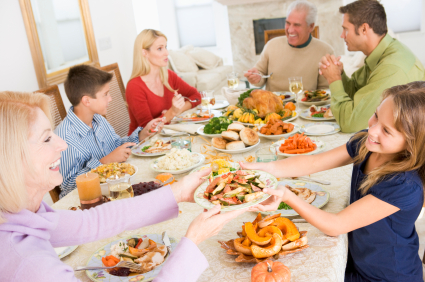 The calorie intake should be spread out over the day with at least three large meals and two small snacks. Starving throughout the day only to binge for a single meal is a sure way of gaining weight, even if you maintain yourself within the allotted daily calorie intake to maintain a healthy BMI. It is therefore advisable for men to eat a maximum of 600 calories (2,510 kJ) for each large meal and about 350 calories (1,464 kJ) per snack . For women, this should not exceed 500 calories (2,092 kJ) for full meals and 250 calories (1,046 kJ) for snacks.

The idea of a traditional Christmas meal varies among different cultures. To most it is a roast turkey with all the sides but for many it may be braai vleis (barbecue meat) or even a curry. The calorie content in these foods may vary depending on whether it is fatty or lean meat as well as the preparation method. The list of calories in these foods therefore only serves as a guide.

The breast is the leanest part of the turkey and the skin should be avoided to trim out all the excess calories. A 100 gram slice (about 4oz) piece of turkey breast without the skin is about 150 calories (628kJ). A single serving of stuffing can add as much as 230 calories (962 kJ) to the meal, even more than just a slice of turkey which is one of the leanest meats. Opting for healthier side dishes may quickly add on the calories – a baked potato can vary between 150 calories (628kJ) and 280 calories (1,172 kJ) depending on its size. Throw in the roast vegetables and gravy and you will effortlessly exceed your daily calorie intake per meal, if not for the day.

A braai is not necessarily a low calorie alternative to the traditional Christmas turkey. Even though a lot of the fat melts away while on the grill, it is still packed with calories. Most dieters will stay away from the red meats and opt for white meat but a single drumstick can be as much as 300 calories (1,255 kJ) whereas a grilled fillet of fish may set you back about 200 calories (836 kJ). Add in the side dishes and drinks and the calorie count of a Christmas braai can quickly spiral out of control.

How to Cut Down Calories?

The problem with the dieting during the festive season is that even when you choose low calorie foods, there is a tendency to overindulge. The key should be on controlling portion sizes rather than just counting calories. Everybody deserves a treat now and then and when better than during the holidays with family and friends. Rather have some of those fatty treats that you would avoid throughout the year but opt for portion sizes of half or even one quarter of what most adults are eating. It is a matter of using your discretion and common sense yet still enjoying the festive feast.